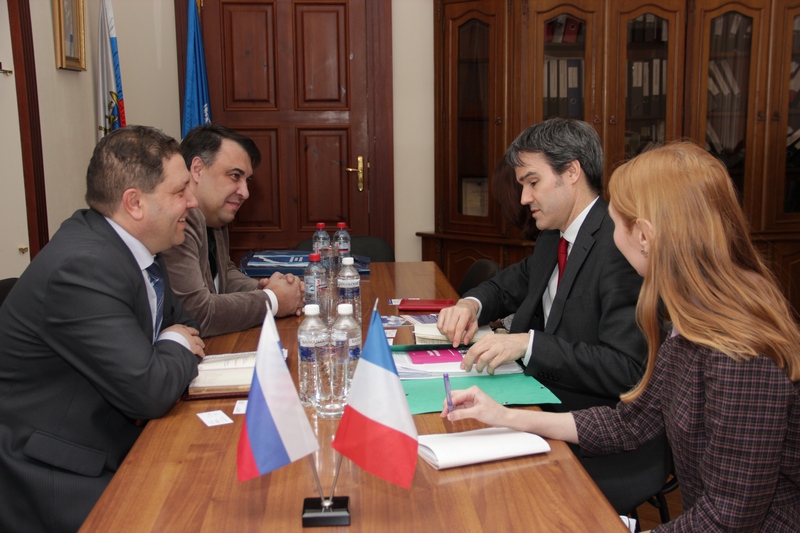 Guillaume Garreta, an Attaché for University Cooperation of the Embassy of France in the Russian Federation, visited ISU to make a presentation about academic mobility programs.
On March 16 Guillaume Garreta had a meeting with ISU Rector Alexander Arguchintsev. Professor Alexander Arguchintsev presented scientific and international projects conducted by Irkutsk State University with a special emphasis upon programs aimed at studying lake Bakial. Guillaume Garreta, in his turn, told about the projects initiated by the Embassy of France.

On March 14 Guillaume Garreta had a meeting with ISU students. He and Svetlana Shkarina, the representative of Campus France, made a presentation “Programs to Study in France”. Guillaume Garreta mentioned that cooperation among Universities and scientific organizations of Russia and France is intensively developing. At present, there are 170 agreements on “double degree” programs signed between Russian and French partners. Besides, in 2015 the governments of two countries negotiated a mutual recognition agreement.

Annually the Embassy of France in collaboration with French Universities and companies provides Russian students with 300 scholarships that are not only for students specializing in French language but for those interested in conducting their research in France. The list of the programs is available on the web-site “Etudier en France”. Guillaume Garreta advised ISU students not to be afraid of submitting their applications. Svetlana Shkarina shared some recommendations how to write a motivation letter and resume.