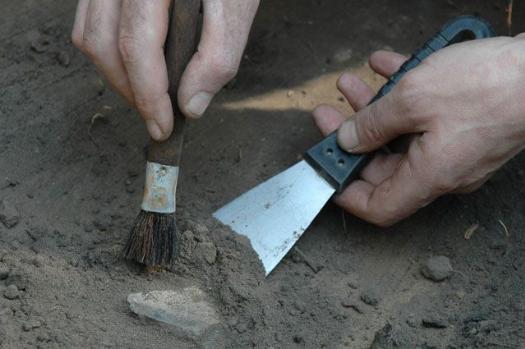 August 15 is marked with an informal holiday for people studying history through the analysis of our ancestors’ material culture.

However, August is a season of an intensive fieldwork and excavations: now ISU archaeologists are on the research expedition in Ust-Ilimsk area of Irkutsk region. They are monitoring the shores of the Boguchany waterbody to reveal the archaeological objects that are in danger of destruction. On August 15 Dmitry Lokhov, a researcher of “Baikal region” center, and Iliya Ulanov, a master program student of history department, left for fieldwork on Rebun island (Japan). During a week ISU archaeologists are to participate in excavations in collaboration with scientists of Hokkaido University (Japan) and the University of Alberta (Canada).

The complex development of archaeology and ethnography started in 1918 when ISU was founded. At first, archaeology studies were conducted by B.Petri, an associate professor of St. Petersburg University. By 1930s  a scientific school was formed, and such famous archaeologists and ethnographers as A. Okladnikov, P. Khoroshikh, E.Titov, G.Ksenophontov, anthropologists M.Gerasimov and G.Debets, and archaeologist-paleontologist I.Arembovsky graduated from it.

Professor German I. Medvedev, a world-known scientist and author of unique discoveries, continued forming an archaeology scientific school at ISU and contributed a lot to theory and methodology of ancient history and studying culture of Siberian native people.

Read more about archaeology scientific school at ISU in the article by German Medvedev “Archaeology Studies in Irkutsk” (in Russian).